Tio was an easygoing tiger.  Sometimes, he even let the vultures eat with him!  Tio embraced his new home from the moment he stepped foot into his outdoor enclosure, bounding out and playfully running around.  Tio enjoyed stalking those who work closest to him, but visitors could get to know this social cat, too.  He would often come up to greet tour guests.  If not, he could be easily seen lounging in his favorite shady area toward the middle of his enclosure.  Tio enjoyed tearing up enrichment and relaxing in his pool during the summer. 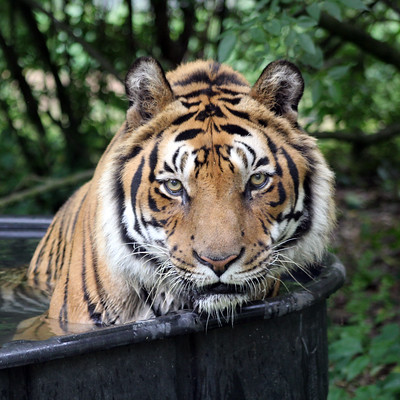 A message from Assistant Director Kathryn Bertok:
Sometimes it feels like when it rains, it pours. The Carolina Tiger Rescue family had to say another hard goodbye to a big personality. Tio Tiger had a physical a short while ago after appearing to not be feeling well. From his physical we found that he was in kidney failure. His blood values had changed dramatically since the year prior. We gave him some meds and a bunch of fluids in the hopes of making him feel better. We hoped the new regimen would make him comfortable, but we knew that our time with him was likely limited. A bit over a week later, he began not feeling well again and we made the decision to let him go.
Tio was an amazing tiger. I can’t think of a single person that met him that didn’t fall in love with him. His enthusiasm for life was infectious. Tio showed the same excitement for food as he did for enrichment, and as he did for spending time with visitors. His even-keeled nature made him adapt to almost any change that came his way. Many animals are nervous about loading into a crate and moving to a new enclosure. Not Tio. He took everything in stride.
I feel like the most perfect example of Tio’s nature was the day he arrived at Carolina Tiger. He came with three other tigers that had a lot to say about making the trip here. There were lots of grumbles, maybe some hisses, and a few roars as we got everyone unloaded – all very reasonable reactions to having your world turned upside down. Tio was the last to come off the trailer. As we got the ladies into quarantine, we checked in on Tio. There he sat, in a crate, after traveling for a day in a weird trailer with grumpy companions, just waiting his turn. He gave a quick chuffle in greeting and we knew then that he was going to be a special tiger.
I know that Tio will always have a special place in a lot of hearts. It’s hard to imagine that an animal that you have never even physically touched can make such an impact on your life, but I watch this happen every day. I’m honored to have a job where I get to not only meet amazing people but equally amazing animals. I get to watch them settled into their new normal. I get to learn about what they enjoy and hopefully offer them a home that gives them a sense of peace. And then I get to share this incredible place with staff, volunteers, adoptive parents, and visitors alike.
As a young adult, I was still unsure of what I wanted to do when I grew up. I now know that what I do isn’t nearly as important as who I do it with. Thank you for being a part of my home and helping us take care of these amazing creatures. Thank you for helping us honor their time here and for helping us mourn as we have to say goodbye. Tio and all of the animals that came before him, and those that will come after him, deserve to have such an inspiring group of people to care for them. Thank you for being a part of that team.
Kathryn Bertok
Assistant Director