Petee was born as part of Carolina Tiger Rescue’s former breeding program. Carolina Tiger Rescue, formerly Carnivore Preservation Trust, was originally founded to breed keystone species in hopes of one day releasing them into a safe environment, but that day never came. The animals who were born here will remain at Carolina Tiger Rescue for the rest of their lives. Petee was one of our more social ocelots.  He loved to come up and greet tour guests and visitors, hoping they will have a treat or two for him.  Petee was a tough ocelot who once took on a copperhead and won!  At times, he would become possessive of his water dish, reminding volunteers that it is his and no one else can have it.  Petee often just hanging out when tour groups visited; he was a tour favorite because he enjoyed checking out his visitors as they tell him how handsome was. 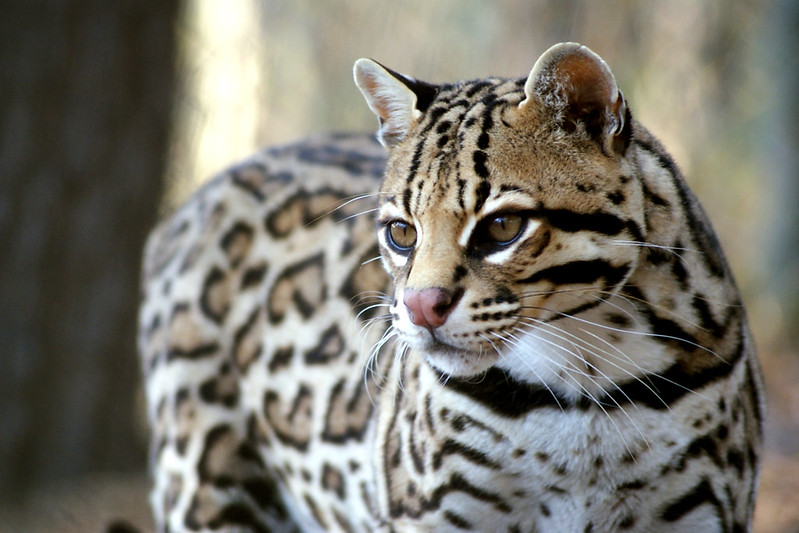 For the past few weeks we have been keeping a very close eye on Petee Ocelot. His appetite had decreased and his coat condition had deteriorated. We knew that his age had not been kind to his kidneys and did everything that we could to help support his failing system. Unfortunately, that battle came to an end this week. Overnight his condition deteriorated quickly and we knew that the only humane option was to let him go. We completed his necropsy and found that he was in multiple organ failure.

Petee has been a star of the public tours for years. He may not always come up for the guest, but he could always be found lounging on his platforms.  While some of our ocelots are more wild, Petee was a pretty laid back older gentleman and was rarely bothered by much going on around him.  Like many of the cats, he loved to create Pawcassos and enjoyed any enrichment that had fun smells!  He particularly liked to rub on smelly perfumes and cologne such as Obsession (a crowd favorite among ocelots).

It’s hard to say goodbye to animals that some of us have known their entire lives or even our entire time at Carolina Tiger Rescue. It’s strange to think of the sanctuary without Petee. But as I look around, my heart is full with knowing that there are so many animals that get to call Carolina Tiger home. I know that every life that comes through the sanctuary gates, both human and wild alike, are changed for the better.