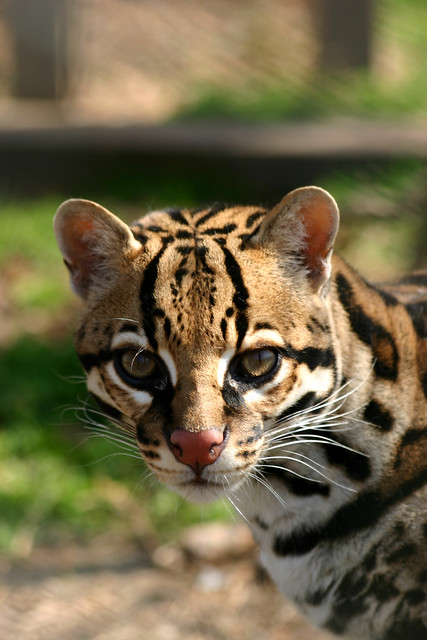 I have sad news to share about Magoo Ocelot. We have been monitoring Magoo’s health and appetite over the past few weeks and he had a noticeable decline in appetite. Upon his last physical, we also noticed he showed signs of renal disease, so we were aware of the potential for kidney failure in the future. We frequently offered him a buffet of options and he even started to pass on his favorite foods. His disinterest in food made it hard to medicate him, so it became more difficult to manage his upset stomach. Keepers kept a close eye on him in the summer heat and even gave subcutaneous fluids and injectable medications, which unfortunately did not seem to improve his appetite or make him feel better. The decision was made to euthanize him. Upon necropsy, we found evidence of testicular cancer.
This will be the end of an era for the sanctuary and for everyone; Magoo was the last surviving ocelot at Carolina Tiger. For many years, we have enjoyed the antics of ocelots, seeing them hang out in their favorite trees, hearing the familiar sound of their grumbles, and smelling their unique scent well before approaching their enclosure. For several years, Magoo was one of the first animals people met on tour.
Even at the ripe age of 21, he was a fantastic hunter, luring in opossums and catching birds and snakes. His love of Axe body spray was well known and he would throw his entire body into somersaults rubbing himself in the smell. Another of Magoo’s favorite items was banana peels; he loved something about their smell. You may have seen some of Magoo’s Pawcassos, as he was an immersive painter. Nothing equaled the experience of watching him roll around and cover his body in paint and be as happy as can be.
We will all miss Magoo and can cherish memories of his bright and charismatic personality. Thank you for your support that allows us to provide lifelong homes for cats like Magoo.
With a heavy heart,
Lauren Humphries, Senior Animal Keeper