Daxon Serval was rescued from a private owner in June of 2017. He was owned in a state where it is illegal to own wild cats and the owner reached out to Carolina Tiger Rescue in hopes we could provide Daxon with a lifelong home more suitable to his wild cat needs. Daxon was always bit shy a bit weary of new people. Daxon enjoyed when visitors sat down a safe distance from his enclosure and just talked with him and provided him with their company. 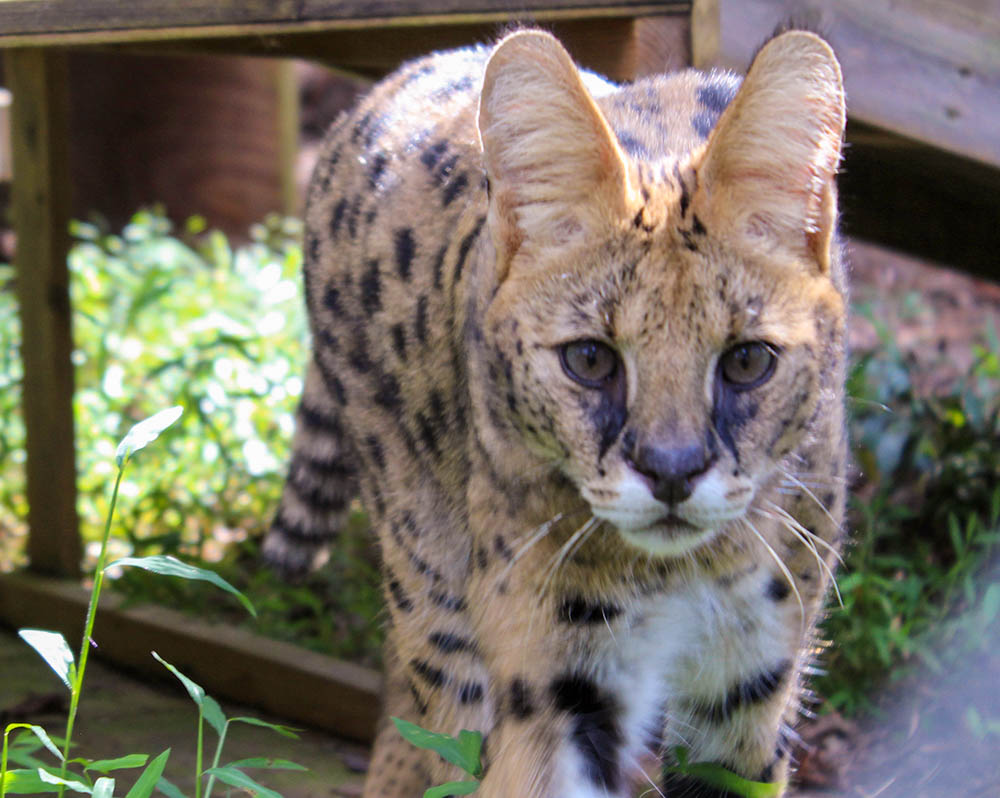 *Daxon passed away in mid October, but due to wanting to do a necropsy (animal autopsy), to find out as many answers as possible, his obituary was delayed.

Daxon has always required a bit of extra attention. He often had issues with stomach upset and constipation. We recently got him down after a few days of not feeling well. His blood work didn’t point to any direct issues, so we gave him medications for an upset GI tract and fluids. The next day he ate a decent meal and we hoped he was improving. The following day, his condition made a dramatic turn for the worse. We took him to our vet at her clinic so that we would have access to additional diagnostics and imaging available to us. We knew his condition was critical and needed to complete an exploratory surgery. During the surgery, we removed old food from his stomach and worked to get his temperature up and to stabilize him. He survived surgery but passed away at approximately 1am. Because his condition had changed so rapidly, we did send off for a necropsy and the pathologist believes that he had gone septic, likely from ulcers found in his GI tract. They were not able to identify the underlying cause of the ulcers. Unfortunately, septicemia is a critical situation and can cause a very rapid decline.

He may not be as well-known as some of our other animals. Daxon was never one for the limelight. He preferred the quiet life near the back of the sanctuary. And honestly, I couldn’t blame him for that. He spent his time in a place of quiet and calm. Not many vehicles make their way back there and even fewer visitors. He seemed to appreciate the serenity that can easily be found there. I have always appreciated that some animals seem to thrive in activity; they are up at the fence just waiting for the next person or vehicle or whatever to come by. Others really want solitude and quiet. I’m thankful that he found his quiet place that allowed him to feel comfortable and happy.

Daxon showcased all the most serval-like attributes you can imagine. While he was a bit shy and took his time warming up to people, he did not hesitate to enjoy his time with naps in the sun or destroying enrichment. We tried on multiple occasions to give him an enclosure-mate, but he seemed to do best on his own (not unusual since servals are solitary in the wild!). If you gave him enough time and space, he would warm up to you and would give you a bit of his time. I must admit that I truly appreciate the animals that make you work for it.