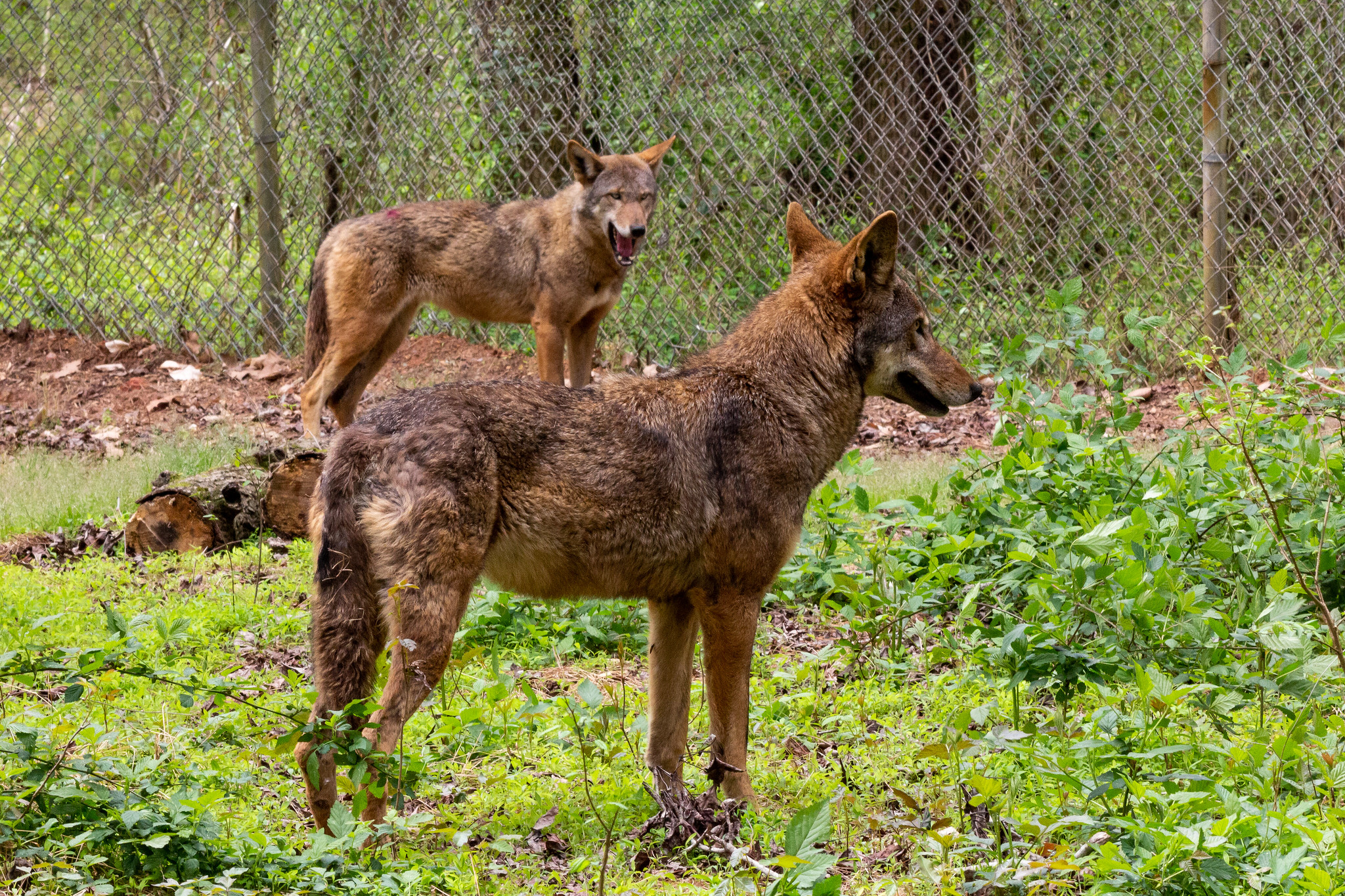 Pittsboro, N.C. – Carolina Tiger Rescue is pleased to announce the arrival of two three-year-old female red wolves to the Sanctuary. Carolina Tiger now joins 49 other sanctuaries, zoos, and facilities that are a part of the Red Wolf Species Survival Plan (RWSSP) and assisting in the captive breeding, care of, and public education about critically endangered red wolves. The two wolves, Caroline and Mist, are settling in nicely in the back of the sanctuary.

“We are incredibly proud to take part in such an important and extensive conservation plan for red wolves,” said Carolina Tiger Rescue Executive Director Kris Marino. “In partnership with the Red Wolf Species Survival Plan and other involved facilities, we look forward to caring for Caroline and Mist and doing our part to save this special native species.”

Caroline and Mist were born at the Durham Museum of Life and Science before being transferred to the Mill Mountain Zoo in Virginia. Now, they will live at the sanctuary for the next few years while they reach the appropriate age for breeding. Both females are a vital part of the RWSSP, a set of extensive conservation measures and activities designed to ensure the longevity and security of red wolves as a species. Carolina Tiger’s role in the RWSSP is to help free up space at other facilities for the continuation of the breeding program.

Red wolves are considered “the American wolf.” Once native to the eastern part of the United States, aggressive predator mitigation strategies and habitat loss virtually wiped them out during the 20th century. After a tumultuous few decades, the RWSSP reports that there are now approximately 20 to 30 individuals left in the wild (located in eastern North Carolina) and more than 200 individuals in captivity. Red wolves are critically important to North Carolina’s ecosystems and could help control the overpopulation of a number of invasive species were they to return to and thrive in their native environment.

Caroline and Mist will not be on public display at the sanctuary in accordance with RWSSP guidelines. To keep up with news, photos, videos, and continued updates on their care, visit Carolina Tiger Rescue’s website, Facebook, and Instagram profiles.

For more information on Carolina Tiger Rescue’s involvement in the RWSSP, please view the following discussion with Senior Keeper Lauren Humphries during a recent event at the sanctuary: VIDEO

For footage of the two red wolves and their arrival, please view the following video: VIDEO

About: Carolina Tiger Rescue is a 501(c)3 GFAS-accredited nonprofit wildlife sanctuary dedicated to saving and protecting wild cats in captivity and in the wild. We work toward a day when wild cats are living in their native habitats and not exploited by humans.