Circuses, white tiger magic acts and big cat shows bill themselves as wholesome shows for the family, the the reality is that every ticket funds cruelty to animals. Travelling shows routinely move animals from town to town in barren cages that deprive lions and tigers of opportunities to fulfill their basic needs to exercise, roam, and play. The only reprieve from perpetual confinement is during their performances, where they are in front of deafening masses of revelers. The lights are hot and bright, the cheers and yells of the crowd are anxiety-inducing and animals in traveling shows are often deprived of food to make them more likely to work for a meal. This stressful, unnatural environment causes animals great anxiety, and behaviors such as pacing, weight gain or attacking trainers or other animals.

Whips, loud noises, fear, threats and actual physical punishment are used to get the cats to do things they would never naturally do, like walking on two legs, jumping through flaming hoops, and jumping over each other, all to entertain a crowd. Because no government agency monitors performances and training sessions, trainers often use whips, electric shock, and heavy chains to control animals. Tigers are naturally, instinctively, terrified of fire and resist jumping through flaming rings. In order for a trainer to get a tiger through a flaming hoop, that animal must be more afraid of physical punishment by the trainer than the fire itself.

Tigers are solitary animals, yet in the circus they are forced in transport cages and in the ring with unnatural and incompatible groups of up to twenty other animals, causing tension, anxiety, and often fights and injuries for all involved. Since 1990, 250 humans have been injured by big cats in captivity. One hundred and twenty-six captive cats and twenty-three humans have died in the US alone, as a result of keeping tigers and lions in captivity.

All White Tigers Are All Inbred

White tigers are popular in magic shows, big cats acts and circuses. They are eye-catching for a reason; they are rare. In the wild, the odds of a white tiger cub being born is one in every 12,000 births. In captivity, breeding for white coats results in one in every thirty born as a “show-quality” tiger. Twenty-nine of the thirty will have detrimental birth defects, like being born blind, deaf, or suffering from epilepsy, scoliosis, and a myriad of other defects. So, if only one is born perfect, what happens to the other twenty-nine? Sadly, many die, are euthanized or sold into the pet trade or to roadside zoos.

When you patronize shows that use white tigers, you perpetuate the inbreeding cycle and cause animals pain, suffering and a life of exploitation. 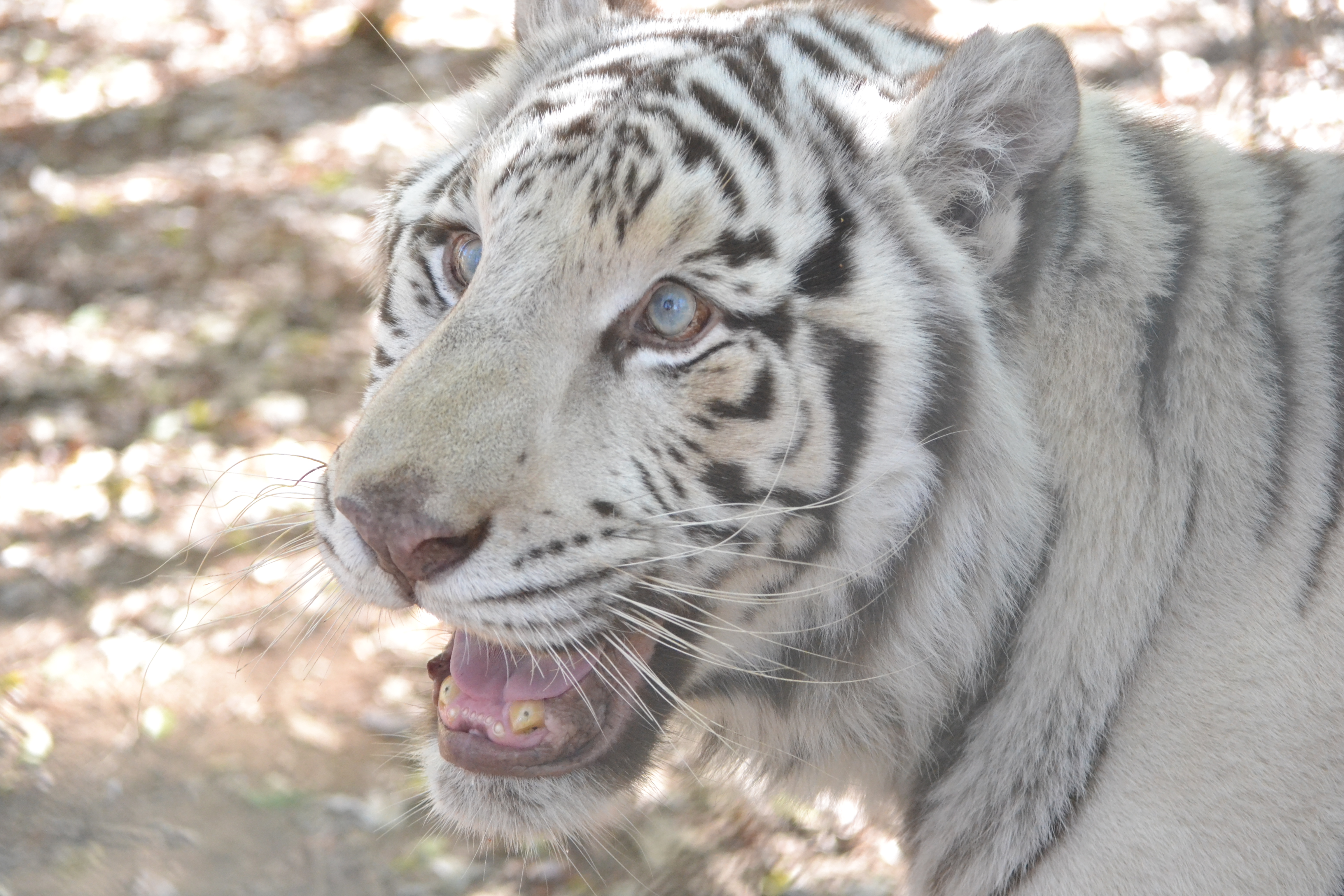 Saber Tiger, a white tiger used in a magic show, is cross-eyed from being inbred and painfully defanged and declawed.

Declawing/Defanging Animals Does NOT Make Them Safe

No big cat is ever safe, even if they have been declawed and defanged. Two painful attempts at making cats more manageable by humans, declawing and defanging causes an animal crippling pain. Often, shows perform these procedures to try and protect the public and trainers. They aren’t successful in doing much but causing pain and suffering for their exploited cats.

With declawing, the entire tip of the toe past the first knuckle is amputated. Cats walk on the tips of their toes, but when they are declawed, are forced to walk on their heels and ankles, displacing their weight to joints that are not meant to hold it in such a way. Declawing often leads to arthritis and other health problems. Sometimes, claws will grow back through the pad, rupturing the toe pad, and causing infection, pain and abscess.

With defanging, canine teeth are often pulled with pliers or filed down to the gumline, leaving the root exposed and the potential for infection and rot. Saber Tiger, a white tiger used in a magic show, was declawed and defanged before he was rescued and brought to Carolina Tiger Rescue. Eating was painful and difficult for him, so we worked to alleviate his pain by bringing in a dentist to do four root canals in a three-hour procedure. We continually monitor his teeth and monitor his pain levels.

How You Can Help: Avoid Wild Cats as Entertainment

There are many issues with wild animals being exploited for entertainment. As long as people buy tickets to these shows, animals will suffer.

Carolina Tiger Rescue is home to animals who are never on display and have the option to come up to the fence when tour groups arrive, or hide in denboxes if they aren’t feeling sociable. All animals receive daily enrichment- activities that stimulate their natural instincts, such as pools, balls and treats. We feed a whole-carcass diet of raw meat, as well as supplemental vitamins, to boost overall health and well-being. We do not breed animals, allow the public to pet animals and we never sell animals or their body parts. We are the only federally-accredited wild cat sanctuary in North Carolina and one of just two Global Federation of Animal Sanctuaries (GFAS) accredited wild cat sanctuaries on the east coast.