Ten Things You Need to Know about Captive Big Cats

Carolina Tiger Rescue is aware of the sensationalized docuseries “Tiger King” that has grown in popularity over the last several weeks. While we are glad that the issue of captive big cats in the U.S. is currently at the forefront of popular culture, we would like to refocus the conversation toward the problem rather than the story. As a GFAS and federally-accredited sanctuary, we would like to share the following list, compiled by the Big Cat Sanctuary Alliance, so the public fully understands our position on the plight of captive wild cats and how you can help solve the problem. 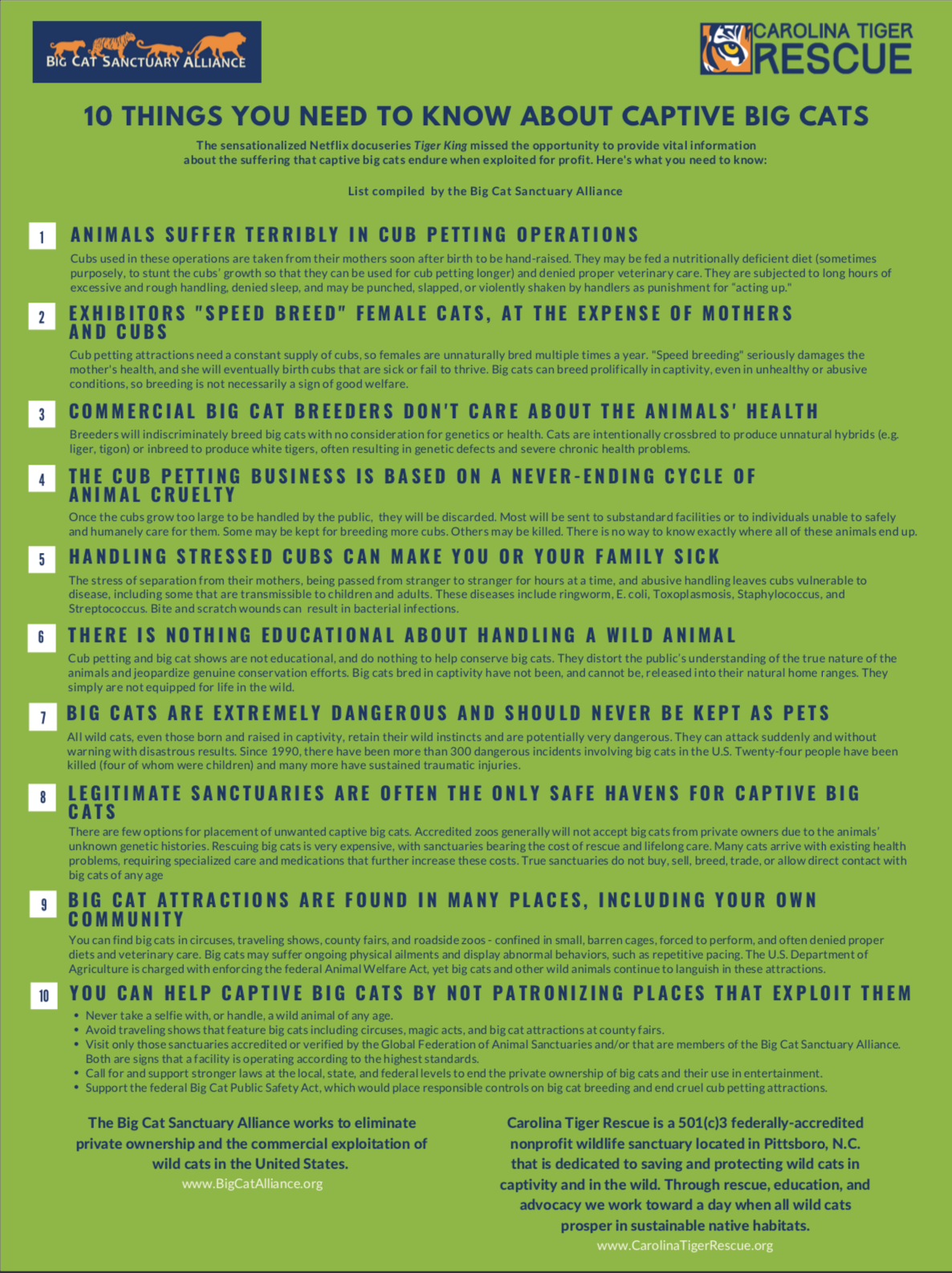 What Tiger King Doesn’t Tell You:
Ten Things You Need to Know about Captive Big Cats

Cubs used in these operations are taken from their mothers soon after birth to be hand-raised. They may be fed a nutritionally deficient diet (sometimes purposely, to stunt the cubs’ growth so that they can be used for cub petting longer) and denied proper veterinary care. They are subjected to long hours of excessive and rough handling, denied sleep, and may be punched, slapped, or violently shaken by handlers as punishment for “acting up.”

2. Exhibitors “speed breed” female cats, at the expense of mothers and cubs.

Cub petting attractions need a constant supply of cubs, so female cats are unnaturally bred multiple times a year. Exhibitors have been observed breeding female tigers up to three times a year – nearly ten times their natural reproductive rate. “Speed breeding” seriously damages the mother’s health, and she eventually will produce cubs who are sick or fail to thrive. Big cats can breed prolifically in captivity, even in situations of neglect and abuse, so breeding is not necessarily a sign of good welfare.

4. The cub petting business is based on a never-ending cycle of animal cruelty.

Once the cubs grow too large to be handled by the public – after as few as eight weeks – they will be discarded. Most will be sent to substandard facilities with deplorable conditions or to individuals unable to safely and humanely care for them. Some may be kept for breeding more cubs. Others may be killed. As seen in Tiger King, big cats have been illegally sold to facilities around the country. There is no way to know exactly where all of these animals end up, due to the lack of government oversight.

5. Handling stressed cubs can make you or your family sick.

The stress of separation from their mothers, being passed from stranger to stranger for hours at a time, and abusive handling leaves cubs vulnerable to disease, including some that are transmissible to children and adults who handle the cubs. These diseases include ringworm, E. coli, Toxoplasmosis, Staphylococcus, and Streptococcus. Bite and scratch wounds can result in bacterial infections.

6. There is nothing educational about handling a wild animal.

Cub petting and big cat shows are not educational, and do nothing to help conserve big cats. These attractions distort the public’s understanding of the true nature of the animals and jeopardize genuine conservation efforts. Big cats bred in captivity have not been, and cannot be, released into their natural home ranges. They simply are not equipped for life in the wild. The commercial exploitation of big cats is all about profit, and nothing else.

7. Big cats are extremely dangerous and should never be kept as “pets.”

All wild cats, even those born and raised in captivity, retain their wild instincts and are potentially very dangerous. They can attack suddenly and without warning with disastrous results. Since 1990, there have been more than 300 dangerous incidents involving big cats in the U.S. Twenty-four people have been killed (four of whom were children) and many more have sustained traumatic injuries. The reported number of people injured by wild cats likely presents a fraction of the actual number, as these injuries usually go unreported.

8. Legitimate sanctuaries often are the only safe havens for captive big cats.

There are few options for placement of unwanted captive big cats. Zoos accredited by the Association of Zoos and Aquariums generally will not accept big cats from private owners due to the animals’ unknown genetic histories. Rescuing big cats is very expensive, with sanctuaries bearing the cost of rescue and lifelong care. Many cats arrive with existing health problems, requiring specialized care and medications that further increase these costs. True sanctuaries do not buy, sell, breed, trade, or allow direct contact with big cats of any age.

9. Big cat attractions are found in many places, including your own community.

You can find big cats in circuses, traveling shows, county fairs, and roadside zoos – confined in small, barren cages, forced to perform, and often denied proper diets and veterinary care. Big cats may suffer ongoing physical ailments and display abnormal behaviors, such as repetitive pacing. The U.S. Department of Agriculture is charged with enforcing the federal Animal Welfare Act, yet big cats and other wild animals continue to languish in these attractions.

10. You can help captive big cats:

– Never take a selfie with, or handle, a wild animal of any age.
– Avoid traveling shows that feature big cats including circuses, magic acts, and big cat attractions at county fairs.
– Visit only those sanctuaries accredited or verified by the Global Federation of Animal Sanctuaries and/or that are members of the Big Cat Sanctuary Alliance. Both are signs that a facility is operating according to the highest standards.
– Call for and support stronger laws at the local, state, and federal levels to end the private ownership of big cats and their use in entertainment.
– Support the federal Big Cat Public Safety Act, which would place responsible controls on big cat breeding and end cruel cub petting attractions.