Cats are split into two categories – big cats and small cats. There are several differences between these two groups, and, no, it is not just their size!

Tigers, lions, jaguars, snow leopards, and leopards are all considered big cats and everyone else is a small cat. That means cougars are small cats even though they may seem large to us!

One difference between big cats and small cats is shown when they eat. Big cats tend to lay down while eating. Small cats, on the other hand, will be on alert and ready to fight or run. As you can see in these mealtime photos, Star Cougar who is a small cat is crouching and Reina Lion who is a big cat is fully laying down to eat. In the wild, Star would have to be more prepared to protect her meal than Reina. There are exceptions to this rule though, such as the snow leopard who is seen as a big cat but usually eats standing up. 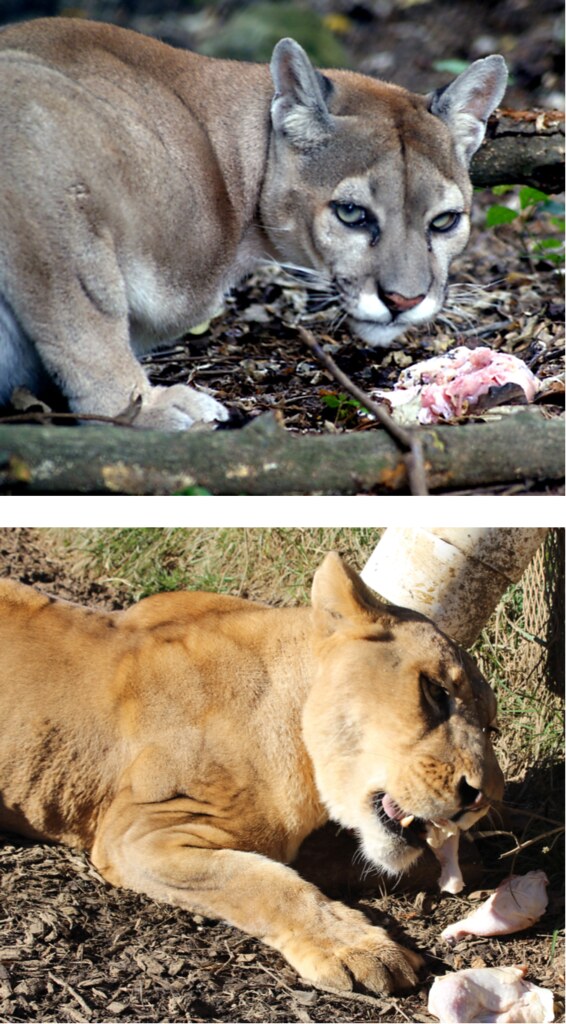 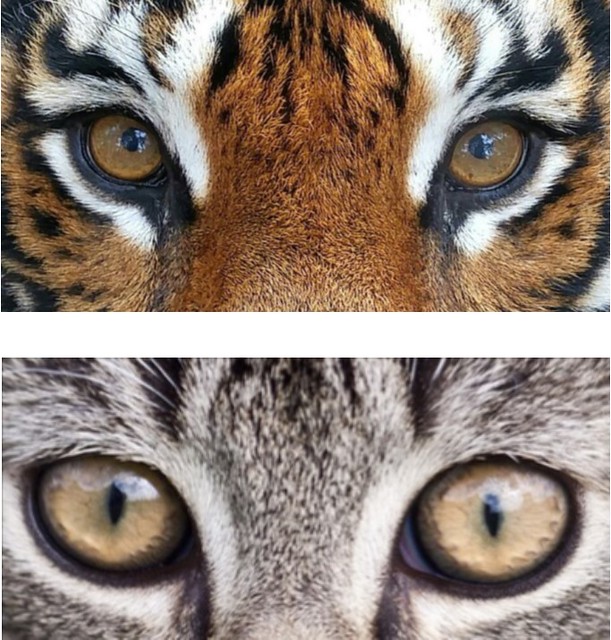 The second difference is in the eyes. If you’ve seen a housecat, what have you noticed about their eyes? Maybe the shape of them has stood out to you! House cats and other small cats have eyes that retract to slits when in bright light. Big cats have more human-like eyes; their eyes retract to circles. Here, you can see big cat eyes versus small cat eyes. Like the difference in eating, this rule is not perfect. There are exceptions to the rule like the caracal and lynx.

Finally, you can tell big cats and small cats apart by their sounds. You’ve probably heard a house cat purr, but have you ever heard one roar? I can guarantee you haven’t because small cats can purr but are not capable of roaring! That means cougars, who are small cats, are the largest cats to purr. The big cats are opposite; they actually are not capable of purring, but, oh boy, can they roar! Big cats have voice boxes and a hyoid bone, a bone in their neck, that are built differently and allow them to make a loud roar. Sound is the golden rule to us here at Carolina Tiger Rescue. If a cat can roar, they are a big cat. I’ll try to upload some sounds soon and maybe I can track down a recording of a roar from one of our very own residents, so keep an eye out for that!