There are a couple major differences between cat paw prints and dog paw prints. One difference is in the pad of the paw. The pad is the biggest part of the print. The rounded sides of the pad are called lobes, and cats have more lobes than dogs. Dogs have one lobe at the top of the pad and two at the bottom. Cats have two lobes at the top and three at the bottom. 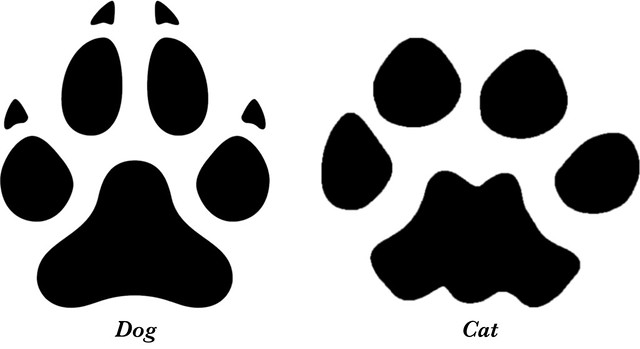 Here are two pugmarks I found in enclosures in the sanctuary. One is by Madonna Tiger and one is by Zoey Serval. Can you tell which paw print belongs to which cat? Consider their species! While you think about that, let’s talk about claws. Another difference between dog and cat paw prints is the claws. Dog paw prints most often include claws because their claws are non-retractable, meaning they can not be drawn back into the paw. Cats, on the other hand, will usually have their claws retracted so they may not show in prints. Claws may be seen in prints left by cats who are jumping or running. There is an exception to the rule though – cheetahs are unique cats because they have non-retractable claws; their claws are always out and provide traction when they bolt after prey. Now for the reveal…if you guessed that the paw on the bottom is Madonna Tiger’s then you are correct! The bottom print is bigger and made by a tiger and the smaller print above it was by none other than Zoe Serval!

Researchers can study animals in the wild using paw prints! WildTrack is an organization that helps monitor endangered wildlife, including tigers, through their prints. They have developed a footprint identification tool that can tell what species an animal is, their age, and whether they are male or female from just a picture of their footprint! WildTrack developed this tool with the help of tiger prints from some of Carolina Tiger Rescue’s residents – check it out here! Study the animals around you by collecting pictures of prints with your family this summer and identifying the different markings. Maybe you will find out that a bobcat lives near your house or that a raccoon trekked through your yard at night. Remember not to disturb wild animals or their habitat and have fun tracking! 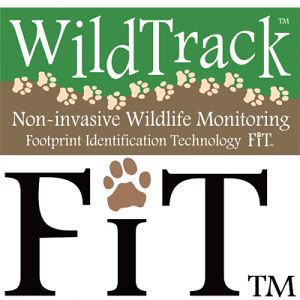