Red wolves are the most endangered canid on the planet. Once common through the eastern and south-central United States, red wolf populations were decimated by the early 20th century because of intensive predator control programs and the degradation and alteration of the species’ natural habitat. As of February 2020, fewer than 20 red wolves roam their native habitats in eastern North Carolina as a nonessential experimental population (NEP), and approximately 250 red wolves are maintained in just over 40 captive breeding facilities throughout the United States. 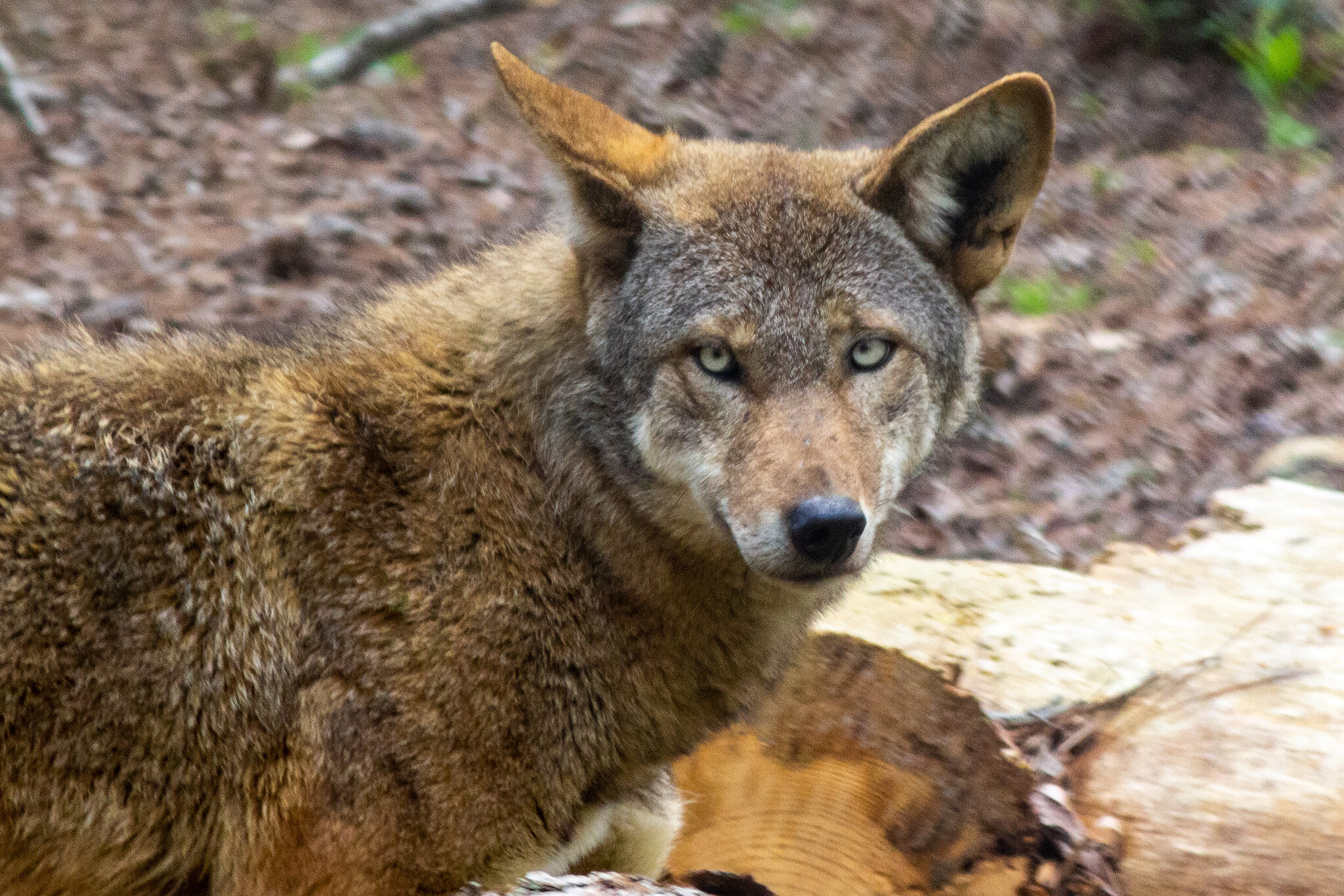 The page you requested could not be found. Try refining your search, or use the navigation above to locate the post.

In the wild, red wolves typically live five to six years, and up to 14 years in captivity.

The red wolf (Canis rufus) is a native North American canid intermediate in size between the coyote (Canis latrans) and gray wolf (Canis lupus). Adult red wolves typically range in weight from about 45-80 pounds. They have wide heads with broad muzzles, tall, pointed ears and long, slender legs with large feet. Adults stand about 26 inches at their shoulder and are about 4 feet long from the tip of the nose to the tip of the tail.

Red wolves are mostly brown and buff colored with some black along their backs, often with a reddish color on their ears, head and legs.

Red wolves are social animals that live in close-knit packs. Typical packs consist of five to eight animals, including a breeding adult pair and their offspring. Older offspring will often assist the breeding pair in pup rearing. Almost all offspring between one and two years of age will leave the pack to form their own. Red wolves communicate through body language, scent marking, and a series of vocalizations that include the characteristic howl, barks, growls, and yaps. Wolf packs have specific territories that they actively defend against other canids, including other wolves. Most active at dusk and dawn, red wolves are elusive and generally avoid human activity.

Red wolves appear to be habitat generalists, given their wide historical range, but they currently occupy the swamps, forests, wetlands and bushlands of northeastern North Carolina. The red wolf was once widely distributed throughout the southeastern United States from the Atlantic and Gulf coasts, north to the Ohio River Valley and central Pennsylvania, and west to Central Texas and southeastern Missouri. Now they occur only in five counties of northeastern North Carolina: Dare, Hyde, Tyrrell, Washington and Beaufort counties.

The primary threat to red wolves is human-caused mortality (gunshots, vehicle collisions), which can remove breeders from the wild red wolf population. These threats, combined with habitat fragmentation from increasing development, allow coyotes to expand into the NEP area. Coyotes can directly compete with red wolves for resources, as well as introduce diseases, and dilute red wolf genetic lines through hybridization. This is particularly true when a pack has lost one of the adults from the breeding pair close to mating season. Additionally, portions of eastern North Carolina where the current red wolf population is located are potentially subject to rising seas levels due to climate change, which could pose a threat to their habitat. 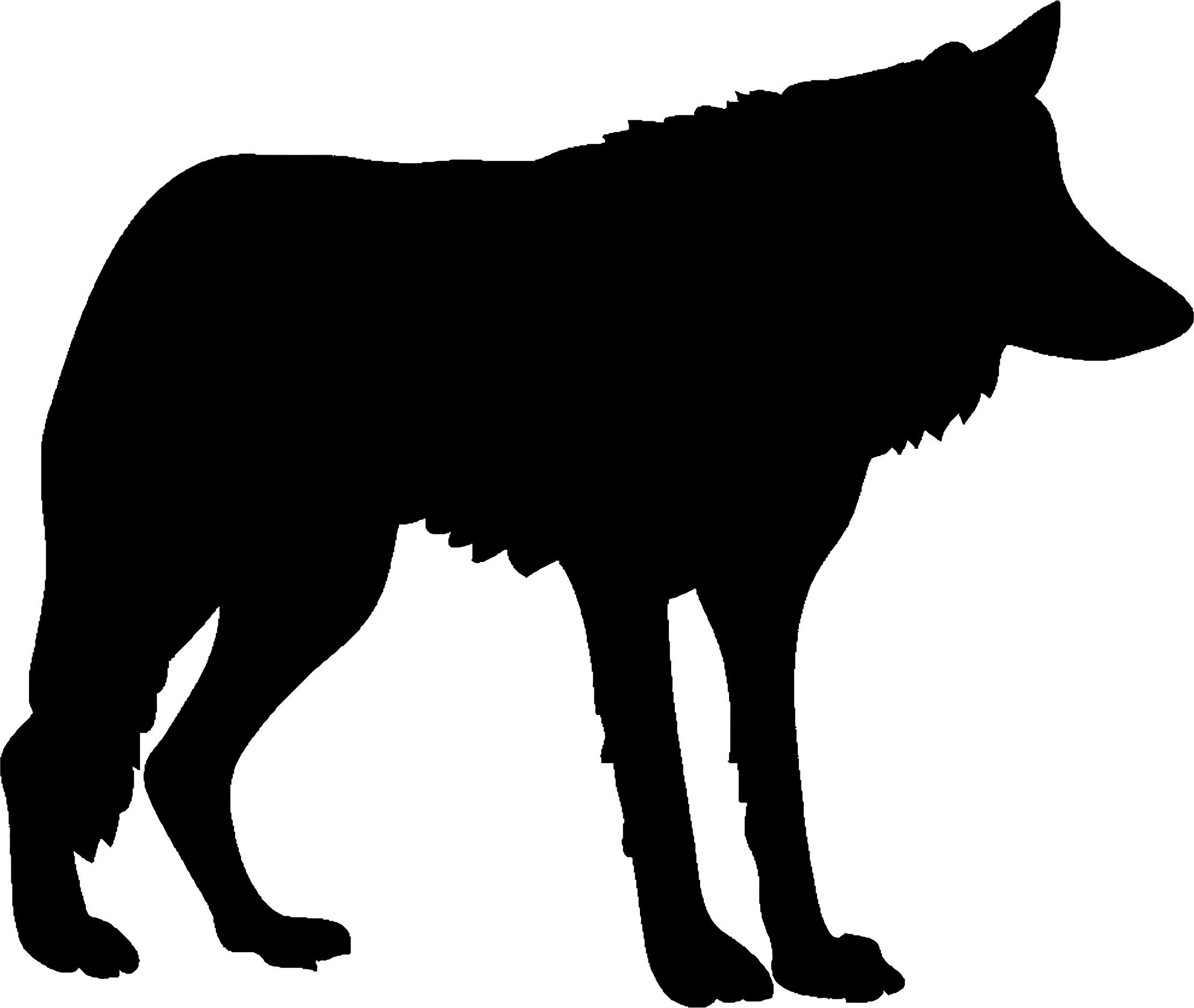 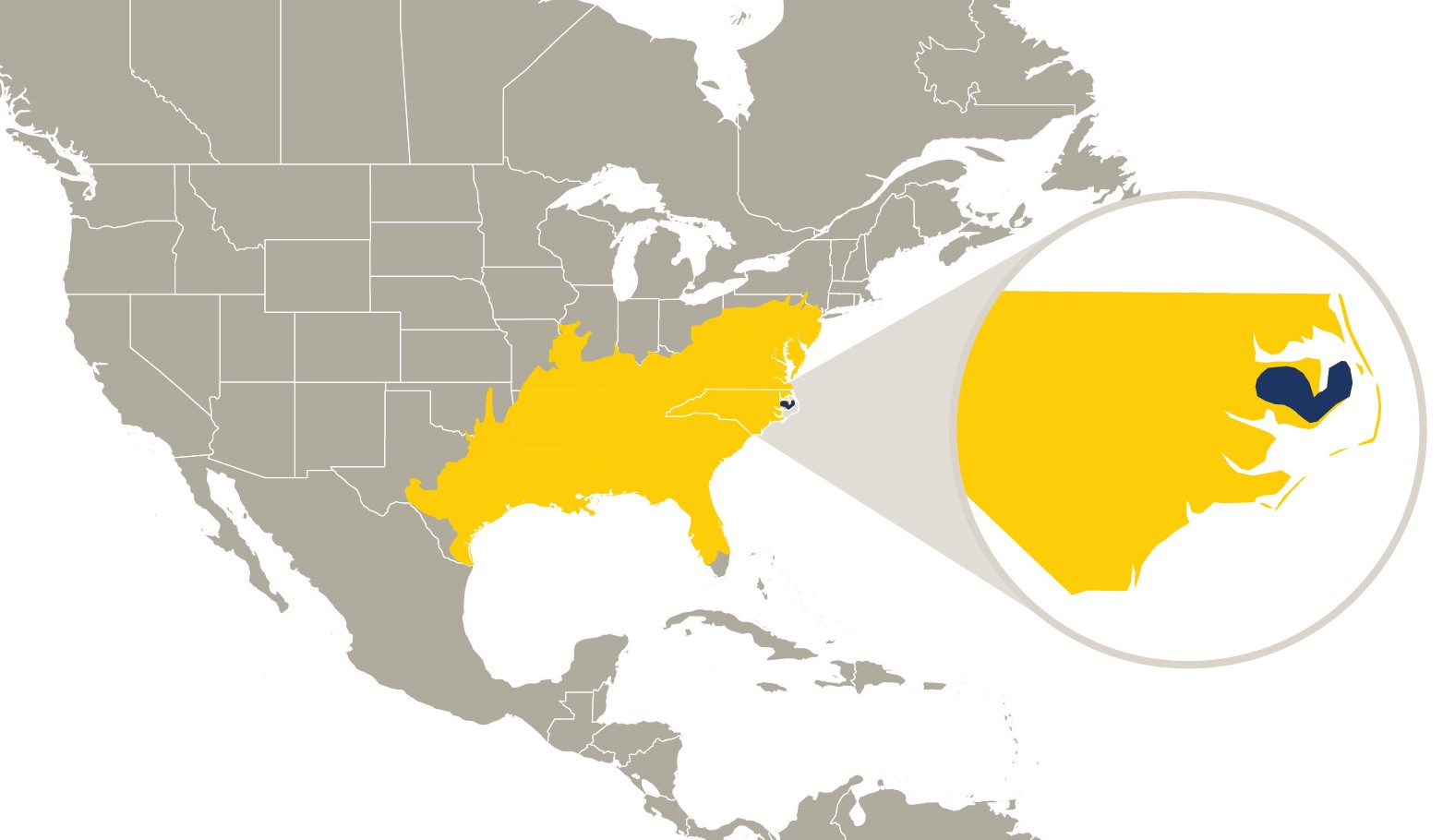 In the late 1970s, red wolves in the wild were found only in southeastern Texas and southwestern Louisiana in coastal prairie and marsh habitat. However, any habitat in the southeastern United States of sufficient size, which provides adequate food, water, and cover, could be suitable for the red wolf. Telemetry studies in eastern North Carolina indicate that red wolf home range requirements vary from about 20-80 square miles.

When the red wolf was first designated as a species "threatened with extinction" under the Endangered Species Preservation Act in 1967, the US Fish & Wildlife Service initiated efforts to conserve and recover the species. As of February 2020, fewer than 20 red wolves roam their native habitats in eastern North Carolina as a nonessential experimental population (NEP), and approximately 250 red wolves are maintained in just over 40 captive breeding facilities throughout the US.

Although the exact diet of red wolves varies depending on available prey, it usually consists of a combination of raccoons and smaller mammals such as rabbits and rodents. Occasionally they will hunt deer. The red wolf is an opportunistic feeder and can travel up to 20 miles a day or more to find food, which can be consumed at a rate of two to five pounds daily.

Red wolves tend to form pair-bonds for life and mate once a year in February. Pups are typically born in April or May in well-hidden dens that may be in hollow trees, stream banks, and sand knolls. Dens have also been found in holes dug in the ground near downed logs or forest debris piles. Fewer than half or wolf pups born in the wild survive to adulthood. Survival rates are affected by disease, malnutrition, and predation.

Red wolves are social animals that live in close-knit packs. Typical packs consist of five to eight animals, including a breeding adult pair and their offspring of different years. Older offspring will often assist the breeding pair in pup rearing. Almost all offspring between one and two years of age will leave the pack or disperse to form their own pack.

Wolf packs have specific territories that they actively defend against other canids, including other wolves. Most active at dusk and dawn, red wolves are elusive and generally avoid human activity.

The recovery of the red wolf began as a remarkable conservation success story. By 1972, the species was reduced to a small coastal area in southeast Texas and Louisiana. From 1973-1980, Fish and Wildlife Services began trapping wild canids in the area to prevent extinction of the species and establish a captive breeding program with the intention of reintroducing the species in the wild. In the early 1970s, Point Defiance Zoo and Aquarium in Tacoma, Washington, in association with FWS, established a captive breeding program using 14 red wolves. After numbers continued to decline due to human persecution and habitat loss, the red wolf was subsequently declared extinct in the wild in 1980.

In 1984, the captive breeding program was approved by the Association of Zoos and Aquariums (AZA) as the Red Wolf Species Survival Plan (SSP) program, which provides oversight for maintaining a healthy and genetically diverse captive stock. By this time, there were approximately 63 individuals in the captive population and the SSP was actively growing the population through the coordinated efforts of the SSP partner facilities, making reintroduction efforts possible.

Recovery efforts in the wild began in northeastern North Carolina with the establishment of a nonessential experimental population (NEP), under section 10(j) of the Endangered Species Act, on Alligator River National Wildlife Refuge (NWR) in 1987. By 2011, this reintroduction effort culminated in a known population of 89 red wolves and an estimated population as high as 130 red wolves within the five-county nonessential experimental population area. This was the first time a large carnivore had been declared extinct in the wild and then reintroduced in the United States. It set the stage for several subsequent reintroduction efforts that were modeled after the Red Wolf Recovery Program, such as gray wolves in Yellowstone and central Idaho, Mexican wolves in the southwestern US, California condors, and black-footed ferrets. Several innovative recovery tactics were first attempted by this program, with a great deal of success, including pup fostering and coyote sterilizations.

After reaching an estimated 130 red wolves in the wild in the late 2000s, the population has since declined dramatically. Human-caused mortality has been the leading cause of this decline. Hybridization with closely related coyotes, particularly in breeding pairs, as well as low red wolf population numbers also played a key role in this decline.

For roughly a decade our animal care team actively worked towards providing a home for non-breeding SSP red wolves. After plenty of meetings, discussions, construction, adjustments, diligence, and a lot of patience, we received our official approval from the Red Wolf SSP team in the fall of 2021. As a sanctuary, we will stick to our core value of not breeding any animals. The SSP team respects our plan to care for older wolves who have aged out of the breeding program, but since we had never cared for this species before, they started us off with two young females for a few years so our team could get used to the ins and outs of the SSP care guidelines without also having to manage the health conditions often associated with age. The girls arrived at their new temporary home at Carolina Tiger in February 2022.

The daily care of these animals, as well as the visiting rules for volunteers and adoptive parents varies greatly from the rest of our animals. We are obligated to follow the rules and guidelines set by AZA.

Because each red wolf is essential to the survival of their species, they all need to remain release-ready. These wolves need to maintain a healthy respect for humans, and we won't be doing anything that could contribute to deeper relationship building beyond what is necessary for their care. A few examples are: